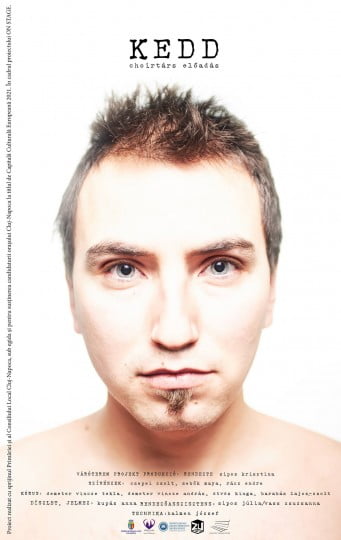 What we can know for sure it’s the cast:
Zsolt Csepei
Endre Rácz
Maja Sebők

The text was written, based on improvisation, by: Csepei Zsolt and The Team

On Tuesdays everything repeats itself. Stories of fiction, in which the illusion gets unmasked. There is a family trauma behind everything? A premeditated crime? An interrogation or a confession? And what’s up with Barabas? We can not know, we can only trust our imagination.
When you have too much to talk about, suddenly you don’t have anything to talk about. “

The play was founded by the City Council of Cluj-Napoca and the Communitas Foundation – UDMR.

“Otherwise, I saw very few shows that are as wild and compromise-free as Tuesday – choirtemporary show. This is avant-garde itself!”

”It takes some time until you get to that freedom to let go of the explanations, we have two actors who appear to be boys (or not) and one who appears to be a mother (or not), and a choir that strongly  appears to be a choir, and something truely absurd, and then we can enjoy how good they sing and how eregetic and free is Csepe Zsolt’s, Rácz Endre’s and Sebők Maya’s performance.”

“The debut of director Krisztina Sipos is a success. But this also required the convincing and energetic performances of the actors. Zsolt Csepei plays the anti-hero narrator convincingly. He alternates between comical and dramatic solutions in a consistent composition. Perhaps he likes these miserable roles, but for shure, Csepei offers the best performance of the last two, three years. Endre Rácz, in his role as a brother, reaffirms the status of young hope, as well as Maya Sebők, whose future performance must be carefully followed. “