“Honourable audience,
Dames and fair maidens,
Windblown vagabonds
And coach driven lordships
You are all invited to follow,
With jaw-dropping excitement
One hundred and one
Fables of the master
Heltai Gáspár!”

Four members of Waiting Room Project theatre company planned to present a selection of fables from the afford mentioned one hundred and one fables in an object animated puppet show. The personified animals that exhibit certain features of the human nature will be presented with the help of puppets thus rendering a rather wide range of emotions linked to human fallibility: cruelty, vanity, demagoguery, envy, pride, revenge, gluttony, pretence. The presence of all these negative features will be skillfully balanced by a great deal of humour and other positive characteristics as innocence and helpfulness. The language of the show displays Heltai’s flavourful archaic use of language, but at the meantime it is understandable and enjoyable. The music plays a paramount role in the show. The puppet masters recommend it from children and adults alike. 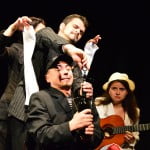 “(…) Get used to the idea that the innocent always suffer, do not seek unnecessary praise, after deed do not wait for reward, you will not solve anything with cleverness and contempt, and if possible try to stay in one place. The animal tales that reflect these seven commands are interpreted with various household items – egg slicers, sieve, salt shaker, can opener etc. – and with lots of music and humor.”

“This is how the eyes of the ant and the cricket are made of tea making eggs, the cow’s udder from inflated plastic gloves, and the tail from the toilet brush. They create the figurines in a very creative way, and they reproduce the stories with lots of energy, fun and zest.”

”I do not believe that we will be given the opportunity to be frequently disappointed in the shows and plays of the Waiting Room Projects that address children. They always manage to detect the main weakness of the wider audience, and this fact is reassured by the recurring great number of visitors of the show and by the tumultuous rounds of applause. The paraFabulák had given us the experience of a funny, exciting and very enjoyable recreation. I recommend it to both adults and children.”