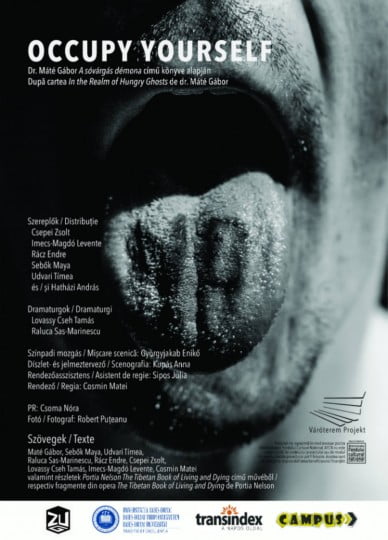 Addiction it’s a form of adaptation to repeated social dislocations. Most people are living on the edge of slavery induced by their destructive behavior, on one side, and a total consciousness and lack of attachment, on the other side. Based on the book In the Realm of Hungry Ghosts by Dr. Máté Gábor, and on he’s field research which corroborates the experience of many specialists, the play Occupy Yourself tries to find the answer to the question: what is addiction and what can we do once we identified it. Using different and complex theatrical forms, the Váróterem Projekt’s group offers an individual inside look which could change your perspective regarding your own addictions.
The project is funded by the AFCN. Many thanks to the Bonus Pastor Foundation, to Mr. Koós Ferenc and to the Performing Space at Chidea.

The play is not recommended for children under the age of 16. 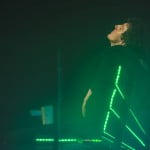 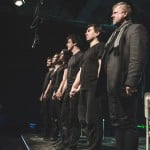 Maria Ruxandra Burcescu: Addiction as a form of uprising
agenda.liternet.ro, October 2016
The show entitled Occupy Yourself by Váróterem Projekt from Cluj is probably the most provocative show seen at the Bucharest Fringe/ Marathon of Independent Theatre, 2016. It is a volatile combination of theatre, concert and psychodrama, which involves the spectator in a very unique way. Occupy Yourself, directed by Cosmin Matei, goes beyond the story to enter directly into the spectator’s intimacy. In one hand this show represents a clinical study about the addiction, on the other it is a method to ask daring questions and to find daring answers.

Oana Stoica: Information as a performance
Dilemeveche.ro, July 14-20, 2016
“The moment of the interaction with the public, placed not by chance in the middle, remains an essential moment of the play, when the spotlight moves from the play itself (expository in a convention) to the spectator (unforeseeable, personal, direct). It’s a welcomed paradigm shift for a couple of reasons. One may be to break the playwright’s pattern (and, implicitly, the monotony). The other reason concerns the involvement of the public in the play, bringing the theme closer to the spectator and to their need to express themselves.”

Gergely Borbála: From addiction to roles in the theatre
www.jatekter.ro, May 9, 2016
„It’s a perplexing question, what I watched (of what I was a part of). A play, an interactive performance, a concert, an AA meeting, an afternoon talk, a circus performance, a PE class: a mixture of all of the above is the Occupy.”

Oláh Badi Levente: Dependency conducts me, I can’t conduct it
foter.ro, November 18th, 2015
„The Waiting Rom Project with their show called Occupy Yourself is trying to find answers to the question: what addiction is and what we can do once we recognized it. What kind of addictions does Hatházi András have?”