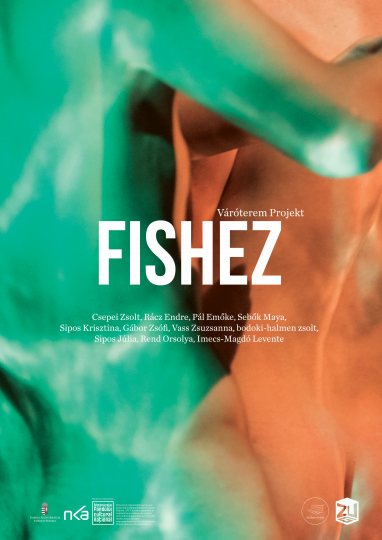 Synopsis:
It is said that fish have a memory of only 3 seconds. That means that every three seconds, the world renews for them. They can be surprised by an echo. In comparison, we humans can store millions of memories.

“I stopped. There, in front of the door. In the shadow. Just for one minute, which lasted seven years. I had goosebumps. I got filled with scales. Only the sounds are humming in my head. One at a time. At least it is something that fragments this permanence.”

The show was sponsored by AFCN, NKA, BGA and EMMI. 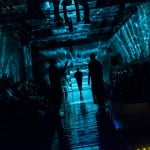 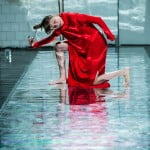 „It’s not a classic tragedy, that is for sure, it’s not a well-made comedy, it’s not even an absurd existential allegory, this playful and depressing vision that the creative team coordinated by Sipos Krisztina brings to us, and around us.”

“Questions remain: how much do we deal with death and how much is it worth to deal with it? Do we have a picture of God beyond worship and a couple of God-forbids? Faith? Is there a soul? But the body? Does an actor think more about destroying his body and losing his youth than any other people? And life? Conscience? I don’t know. It rarely happens that such an elusive show leaves behind so many questions. And even more, it does so with humor, or at least in a stoic way. There’s also the floating, the splashing. I would stay longer. “