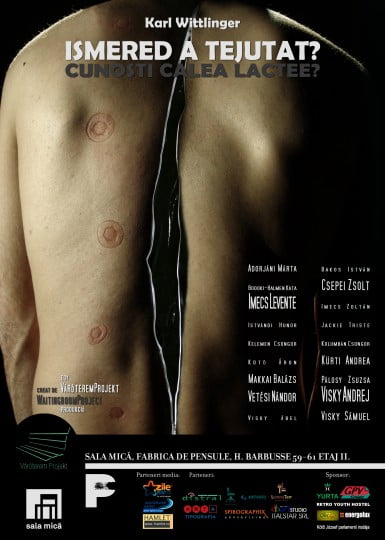 Breaking News: Helmut Neuross, renowned neurologist(Imecs Levente) and his patient Johannes Schwarz (Visky Andrej) have committed suicide by jumping out of the widow (of the Neurological Institute)….. snitt. The next scene is set in a morgue where two corpses come to life and realise that they are latched there together and are forced to see and participate in a play that had been inspired by the life of one of them. Lost is space and time they are desperately seeking the answers to the following questions: What happened to them? Why can’t they die?
The stories they see in the play are the only points of reference – they have no choice but to except the roles. The surreal (probably even crueller than the real) roles of these two dead actors are the following: Johannes Schwarz relives or replays his life and Helmut Neuross is forced to assist. The plot of the play features several settings and stories: the role-play of the dead,the scene that presents the work of the corpse washers as they prepare the bodies (Csepei Zsolt és Vetési Nándor) and the videos left behind by the two deceased – a frame story: a play within a play. When will the funeral take place?

Do you Know the Milky Way?
kolli-baci, 2011
”The audience will see a beautifully built and elaborated characters. Both main characters are created from scratch they emerge and develop before the eyes of the audience. They emerge from the void, come back from death to the living while the audience gains access to more and more information about their lives and circumstances of their deaths.”
Kicsien

”The alert rhythm of the performance is duly rendered by all four actors. This play is a lucky blend of the cinema and theatre, both are considered equal and in many cases the ’cold’ scenes become the means of the somewhat lyrical manifestations.”
szaffi

”It is laudable that they have had the courage to tackle such a text, a theatre company should not have the same agenda as a public theatre.”
KovácsLevente

Péter Demény: Face sewing
Szabadság, 2010. december 4.
”These young humans emanate talent, they have some chisel-work to do. From the four of them Imecs Levente and Visky Andrej had a more difficult task, and not because, they were on the stage longest, but due to the fact that they had to put on many different masks, and they had to endure the stitching: doctors, patience, returned legionaries, soldiers considered dead, Italian half-mobsters, guest workers – all this rather colourful range of characters are played beautifully and with great sense of proportion. (…) Csepei Zsolt’s and Vetési Nándor’s performance is also remarkable.”