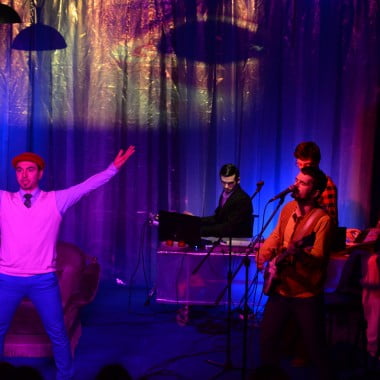 Thanks to the funding from the Bethlen Gábor Fund, Váróterem Projekt organizes a Transylvanian tour, and after the first stop at Timișoara, this time the performance Zero, directed by Botos Bálint arrives to Sfântu Gheorghe.

Our ensemble is a regular guest of the city, because in addition to our children’s shows, Flightrisk freckles and The Pea Test – which have been presented thanks to the good relationship with the Cimborák Puppet Theater – we also presented Bánk bán? Present!. In the Kamara Hall we have presented in the past Faites vos jeux! and  Advertego, and most recently we presented the performance Reacting Chernobyl, accepting the invitation from Andrei Mureșanu Theater, at the D-Butan-T Festival 2017.

Vass Zsuzsanna and Rácz Endre, former members of the ensemble, are currently actors of the Tamási Áron Theater. Endre also plays in Zero, to which we invite all those interested from Sfântu Gheorghe on Sunday, December 10 at 20 in the Kamara Hall. 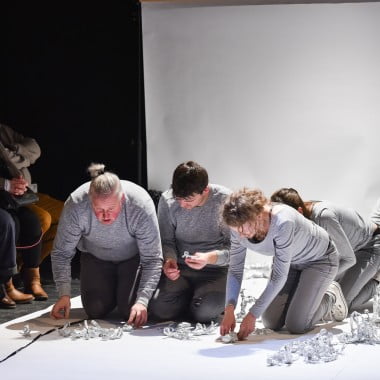 Our performance entitled Reacting Chernobyl, directed by Cosmin Matei will be played at Timișoara. The show can be seen on Friday, December 8, starting at 19.00 in the studio hall of the Hungarian State Theater Csiky Gergely. The performance is part of the tour called 3×3, sponsored by the Bethlen Gábor Fund.

It is not the first time Váróterem Projekt is invited to the Banat capital: Bánk bán? Present! was performed in several classrooms in Timișoara; the performance of great succes, Advertego, directed by Botos Bálint was also played in the studio hall of the theater, and most recently, by accepting the invitation of the National Theater of Timișoara, the performance Tuesday – choirtamporary show, directed by Sipos Krisztina was presented at the Fest FDR Festival 2017.

Two young actors of the Hungarian State Theater Csiky Gergely, Simó Emese and Molnár Bence are former members of our ensemble and are still playing in Advertego. We will also visit them as well! Everybody is welcome, therefore, on December 8 at 19 o’clock. 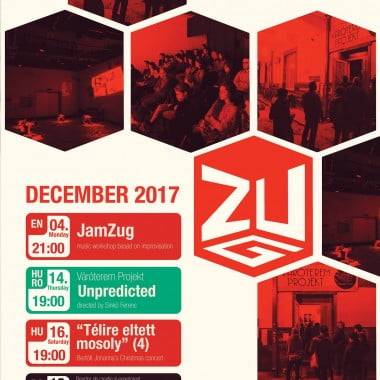 In the last month of the year, we have a bit of everything for you! ZUG.zone hosts the well-known JamZug music workshop again, a Váróterem Projekt production and an invited production as well, but we also have a Christmas concert to bring the festive spirit.

On December 4 at 21 o’clock, we invite all music lovers to a new JamZug music workshop;

on December 14 at 19:00 will take place this year’s last presentation of the production Unpredicted, directed by Sinkó Ferenc;

on December 16, at 19:00 Bertóti Johanna will perform a Christmas concert to bring the festive spirit to ZUG for the fourth time;

on 18 December at 18 o’clock, the production În viitorul apropiat can be seen, produced by Reactor de Creație și Experiment in collaboration with Váróterem Projekt, directed by Cristian Ban. After the show we will end our programs of this year with a new music workshop, JamZug, starting at 21 o’clock.

With the holidays approaching, the Váróterem Projekt steps out from the ZUG for a little time and travels to Timișoara, Sfântu Gheorghe and Zalău. In all three cities three different performances can be seen, as part of a Transilvanian tour, entitled 3×3, sponsored by Bethlen Gábor Alap.

On December 8, Reacting Chernobyl, directed by Cosmin Matei, arrives in Timișoara and can be viewed from 19:00 at the Hungarian State Theater Csiky Gergely, in the Studio Hall;

on December 10, the performance Zero, directed by Botos Bálint will be presented in Sfântu Gheorghe, starting at 20 o’clock at the Kamara Hall;

on December 12 we look forward to seeing the little ones in Zalău where we will be presenting The Pea Test performance in the Mihai Eminescu General School starting at 9 o’clock.

Thank you for joining us this year, and we look forward to seeing you in ZUG!